We’ve all been there: you’re driving in your car cruising along when, all of a sudden, you hear the sound of a police siren and see those red and blue lights flashing. If you’re lucky, the police officer is simply apprehending a fellow driver or responding to some an emergency.

In most cases, however, those lights and sounds mean you’ve got a speeding ticket on the way.

Drivers around the country have experienced the pains that come with a traffic stop, and for some people, it probably feels like the police in their state are a little quicker to pull people over than in the rest of the country. Here at Yonkers Honda, we decided to do a little digging to find out which states’ drivers are truly justified in those beliefs.

In order to properly evaluate which states truly give out the most and least speeding tickets, we had to comb through a variety of data sources because there isn’t a national database with that information. In fact, every state collects this information differently (or doesn’t collect it at all). For some states, the information was readily available; for others, we had to sift through local or federal reports to find it. In a few different cases, we even had to reach out directly to the state police and have them send us their internal numbers.

All told, we were able to get at least one year of speeding ticket data from between 2011-2017 for 48 of the 50 states (Arkansas and Louisiana proved too elusive), and for most of them, we were able to find and compare that data across multiple years in our time frame.

First, we compiled all of the data we collected into one place and decided to turn it into an interactive map focusing on the total volume of tickets issued by every state.

States are ranked from least to most tickets given out in the most recent year data was available, with states that give out the fewest tickets showing up in green and progressing to red for states that give out the most tickets overall. Clicking on a state reveals specific numbers of tickets issued for different years in that state, as well as additional data including changes over time in terms of speeding ticket issuance.

We also put together a listing of the ten states that issue the most total speeding tickets, putting them all in one easy-to-read place: 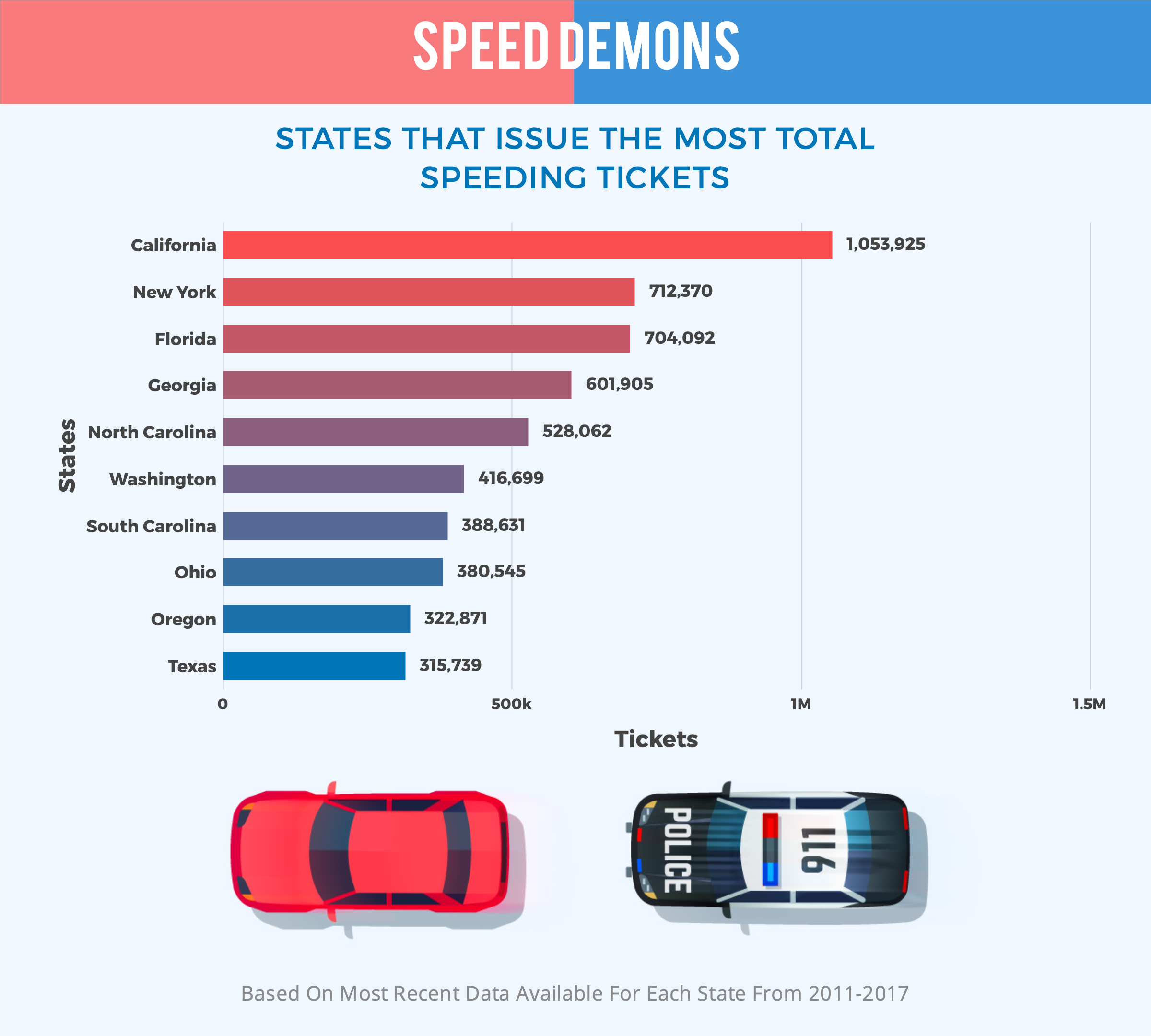 Of course, looking at raw ticket numbers doesn’t tell the whole story, as states with larger populations like California and Texas will naturally give out more speeding tickets based on sheer population size. With that in mind, we took the number of tickets every state has issued and the most recent population count from the US Census to find out how many tickets each state issues per 10,000 people that live in the state.

This allowed us to get a truer idea of which states are the most and least likely to issue speeding tickets to drivers, once again creating an interactive map based with the same green to red color key. What this information showed us is that Wyomingites and South Carolinians are far and away the most likely to receive a ticket, while those in West Virginia, Michigan, and North Dakota are the least likely to get one. In fact, Wyoming drivers are over 14 times more likely to be issued a speeding ticket than those from West Virginia!

On an even more granular level, we looked at tickets and population another way by calculating how many citizens live in every state for every ticket issued there. The rankings are the same as the per 10,000 people calculation we have above, but we made this data set a little more accessible by using even small numbers. At the top of the list is Wyoming, where one out of a little more than 11 people in the state can expect to receive a speeding ticket.

The same calculation was run for states that issue the fewest speeding tickets, again producing the same ranking as the per 10,000 people evaluation but in a more digestible way. Looking at things this way, we see that there is only one speeding ticket issued in West Virginia for every 155 people that live there.

As we collected and evaluated America’s speeding ticket statistics, we noticed that most states seemed to have been issuing fewer tickets in recent years, with some states issuing significantly fewer tickets over the time period we looked at. Once we looked into the overall changes, our suspicions were confirmed as we found that, on average, states are issuing 6.5% fewer tickets from 2011 to 2017, which represents an average of more than 32,000 fewer tickets issued by every state over that time.

Beyond the national drop, we found a number of states experiencing major shifts towards issuing fewer tickets. Four different states issued 40% fewer tickets from 2011 to 2017, with Texas and Illinois both seeing drops greater than 50%, at 54.10% and 50.54%, respectively. Good news for drivers in those states!

While most states have trended towards giving out fewer tickets, there are those that have gone the opposite direction. While, for the most part, these increases are less drastic than the top decreases in speeding tickets, there was one state that sticks out as a significant outlier. If any drivers in Oregon feel like a lot more people are being busted for speeding than in the past, they’re right. We found a nearly 80% increase in tickets issued in the Beaver State!

Regardless of whether you’re a speed demon by default or generally move along at a more slow and steady pace, every driver has those moments when the speedometer creeps over the posted limit and in those moments everyone is hoping to avoid a ticket. Having taken a good long look at the data, those with the need for speed may want to move to West Virginia while avoiding any trips to Wyoming. Or, maybe you could consider purchasing a safe, reliable car that comes equipped with cruise control from Yonkers Honda. We have a wide selection of makes and models that will get you to your destination in style (and hopefully without a speeding ticket). To learn more, get in touch with us today!