For most people, car buying is a process. There’s research on different makes and models, and then whether to buy new or used. Then, of course, you have to find the right price to fit your budget. At Yonkers Honda, we were interested in discovering the car buying habits of Americans across the country. So, we decided to survey 500 people who had bought a car within the last 36 months, asking a variety of questions involving how they go about buying a car. 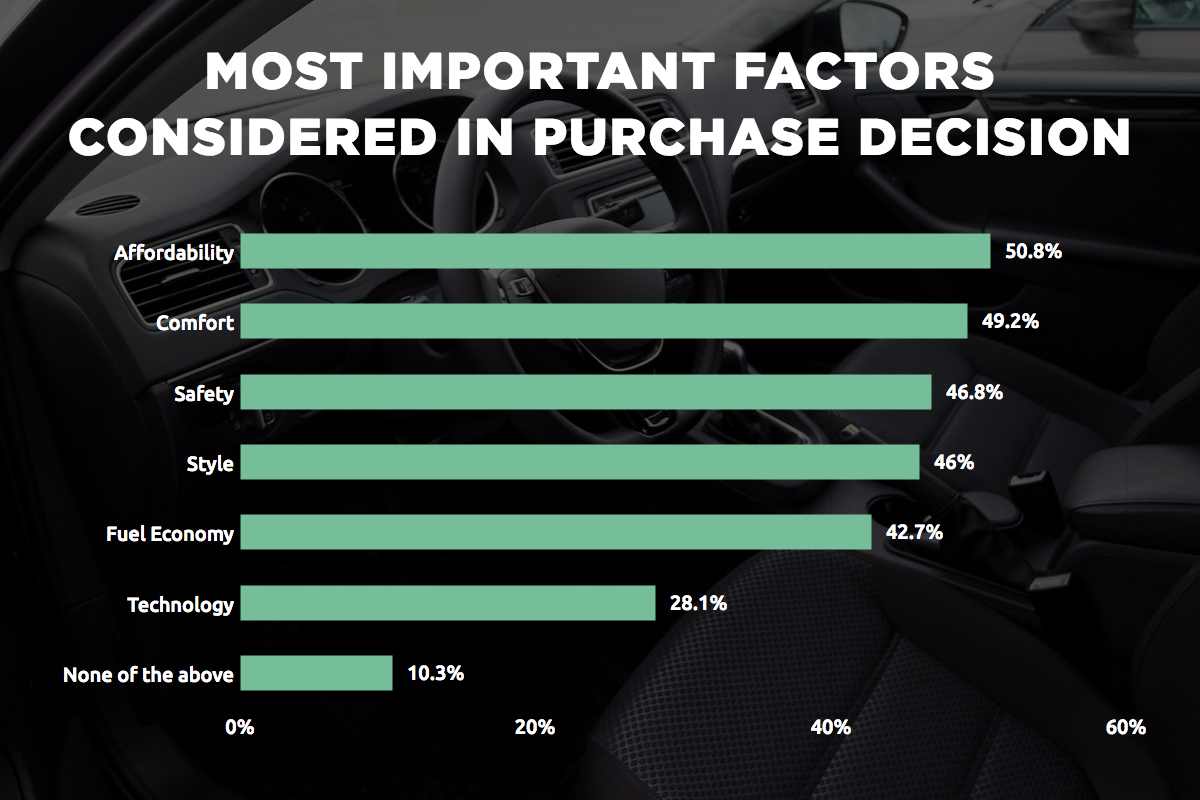 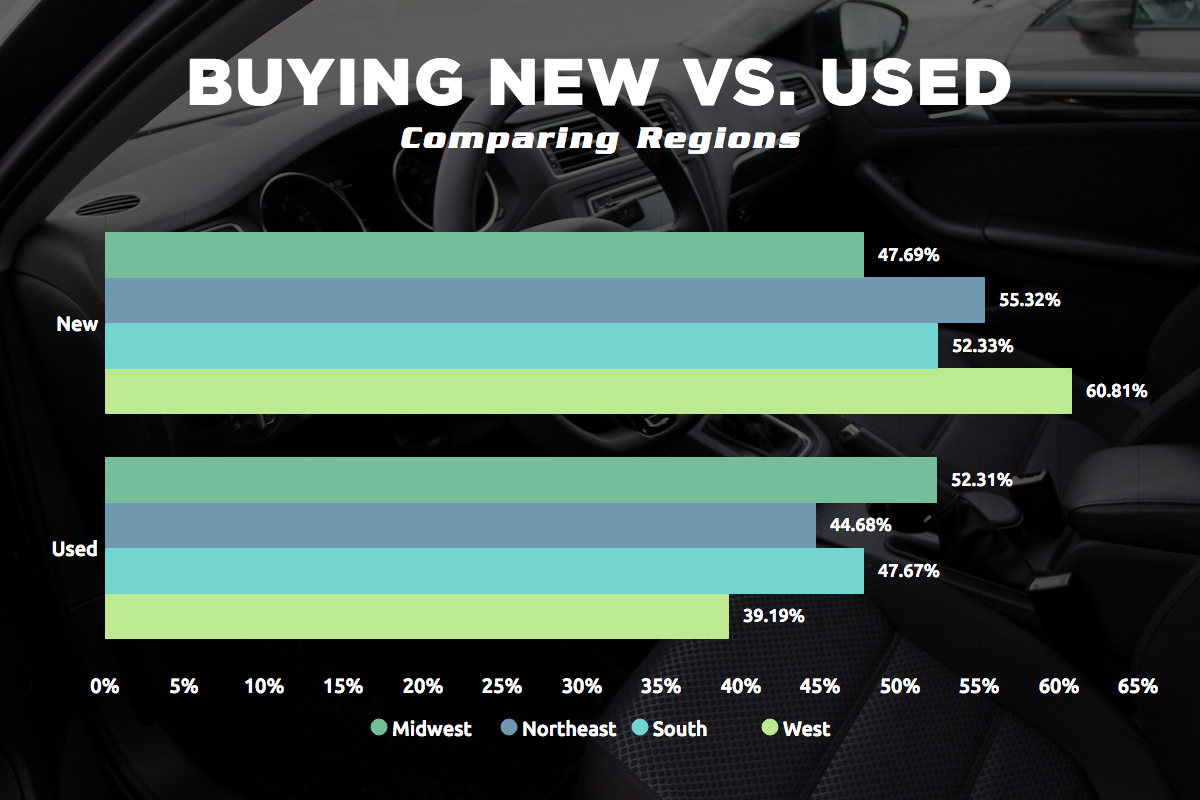 To start research on a car to buy, many people turn to online sources. Kelley Blue Book was the most popular choice, followed by local dealership websites. Edmunds.com and Consumer Reports were the two least popular options

As far as time spent researching cars before actually making the purchase, it was interesting to see the breakdowns by regions of the country. While most of the United States said they only spent a couple days, the West had the most of any region. The Northeast seemed to be the most cautious with the highest number of respondents who said they took 6 months or more on research.

Then, we looked at how many times people checked the price online before buying. When looking at men and women, men checked more than 5 times at a significantly higher rate than women. Women also had the higher response rate of one online check. 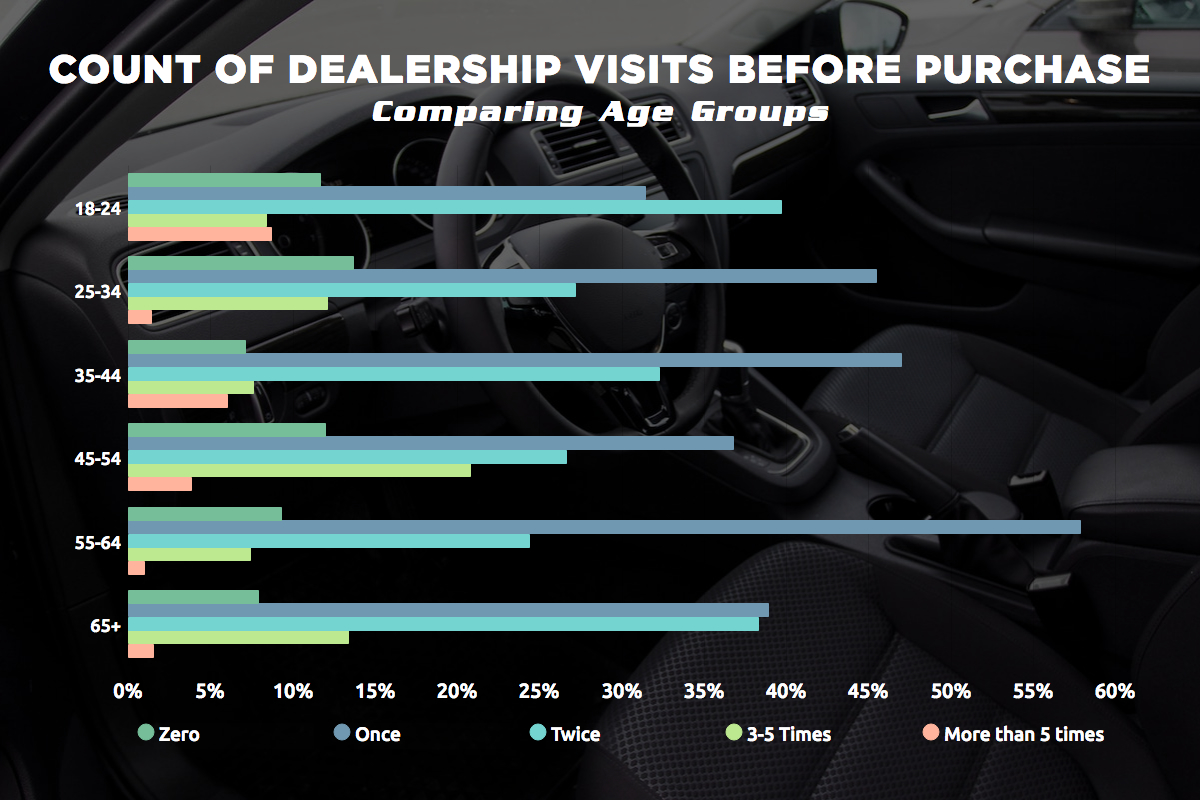 When it came to the most iportant factors considered in the purchasing decision, affordability was number one, followed by comfort and then safety. Technology was last. When broken down by gender, women preferred safety slightly more than comfort. Men prioritized technology around 8 points higher than women 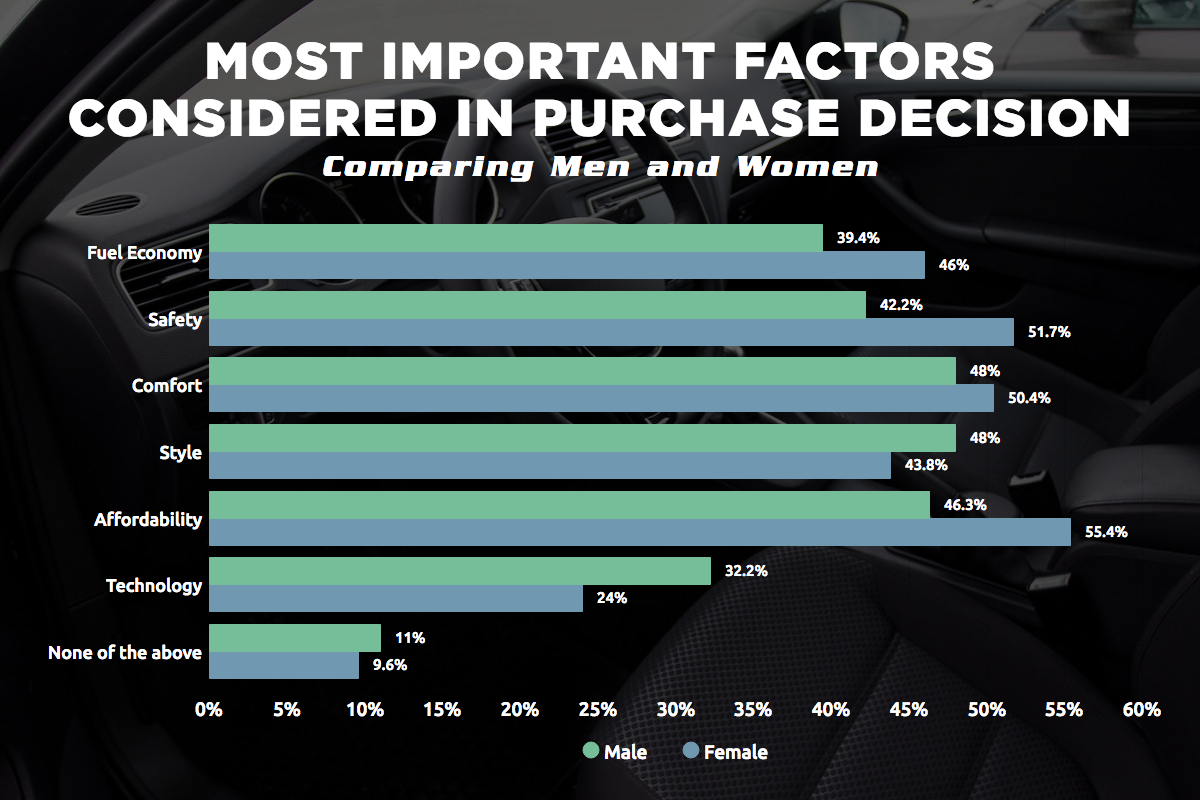 Breaking down the priorities by region, the West valued comfort the most. The West also had many more people who wanted technology in their cars. Those in the South had the highest amount of people who prioritized style compared to any other region.

Finally, we looked at the amount negotiated on the price. When analyzed by region, the South was the region that negotiated the most off the final price. The Midwest, however, had the most responses of zero dollars negotiated. 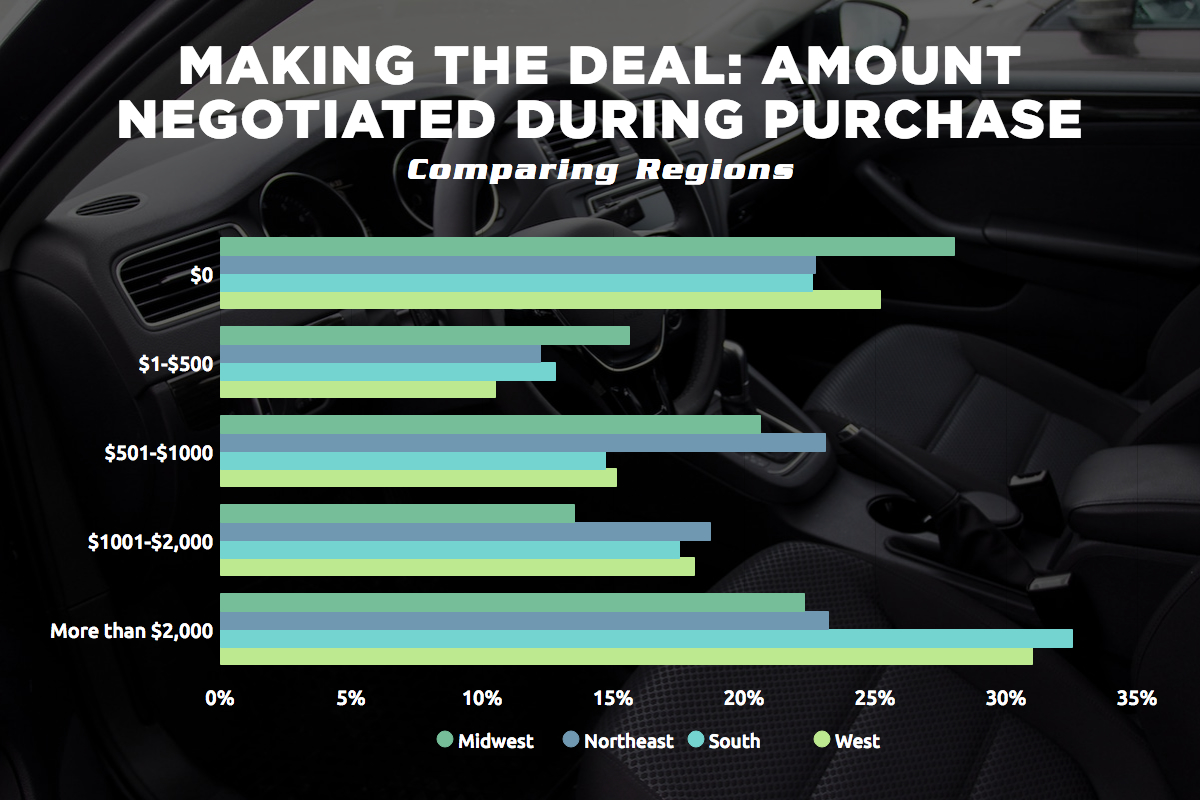 When looking at men and women, there were a number of differences. Just over a third of men said they negotiated more than $2,000 off the final price compared to 22% of women. As far as bringing the price down between $1 - $2,000, the stats were fairly even. But when it came to negotiating $0 off, women were 8 points higher than men at just over 28%. 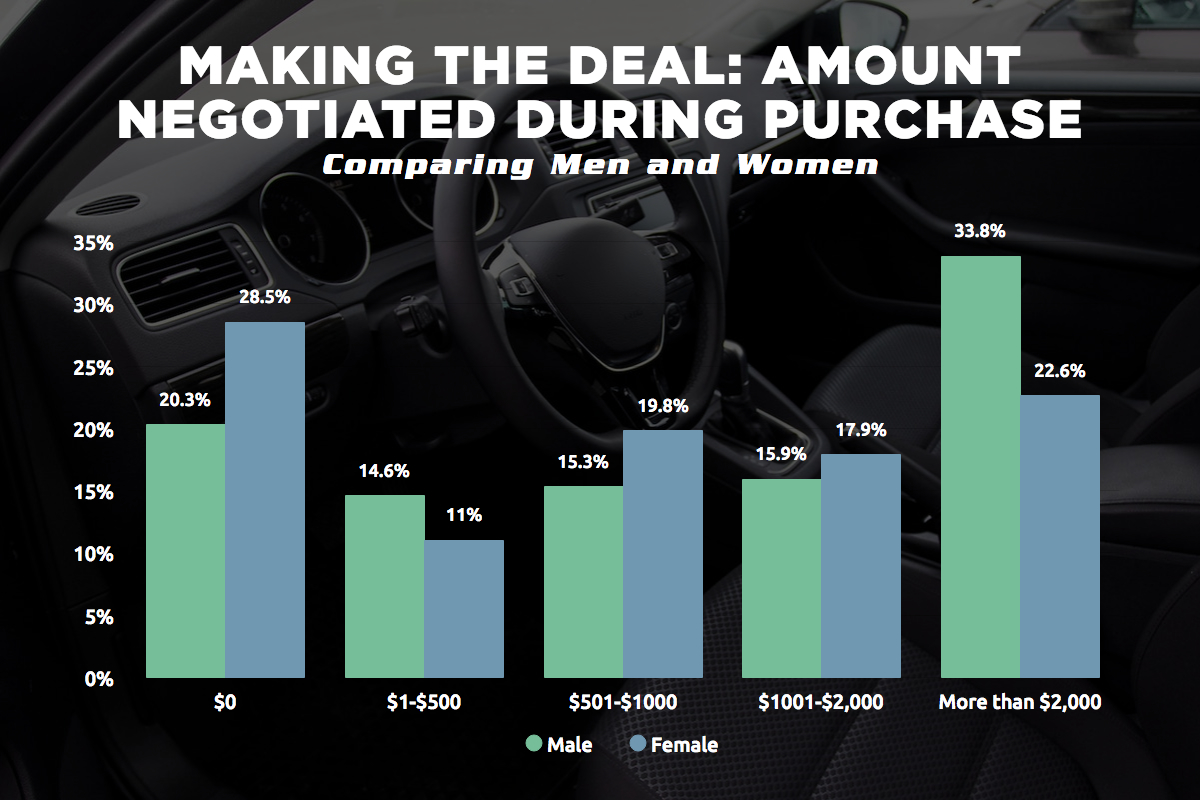