Most Searched Car Brands Across the US

At Yonkers Honda, we understand that there’s a lot of car brands out there to choose from. We were interested to see the popularity of Honda as well as other brands locally. We turned to Google Trends, and quickly realized that we’d opened an interesting can of worms and then decided to dig into consumer interest for top car brands on a national scale and how it has changed through the years.

Google Trends is a useful tool that gauges the popularity of a search term over a given period of time in a set geographical area. In this case, we looked at search interest for 32 top car brands in each state so that we could determine what the most searched car brand was for each state. We looked at Google Trends data from 2012 - 2017 and revealed some fascinating results. 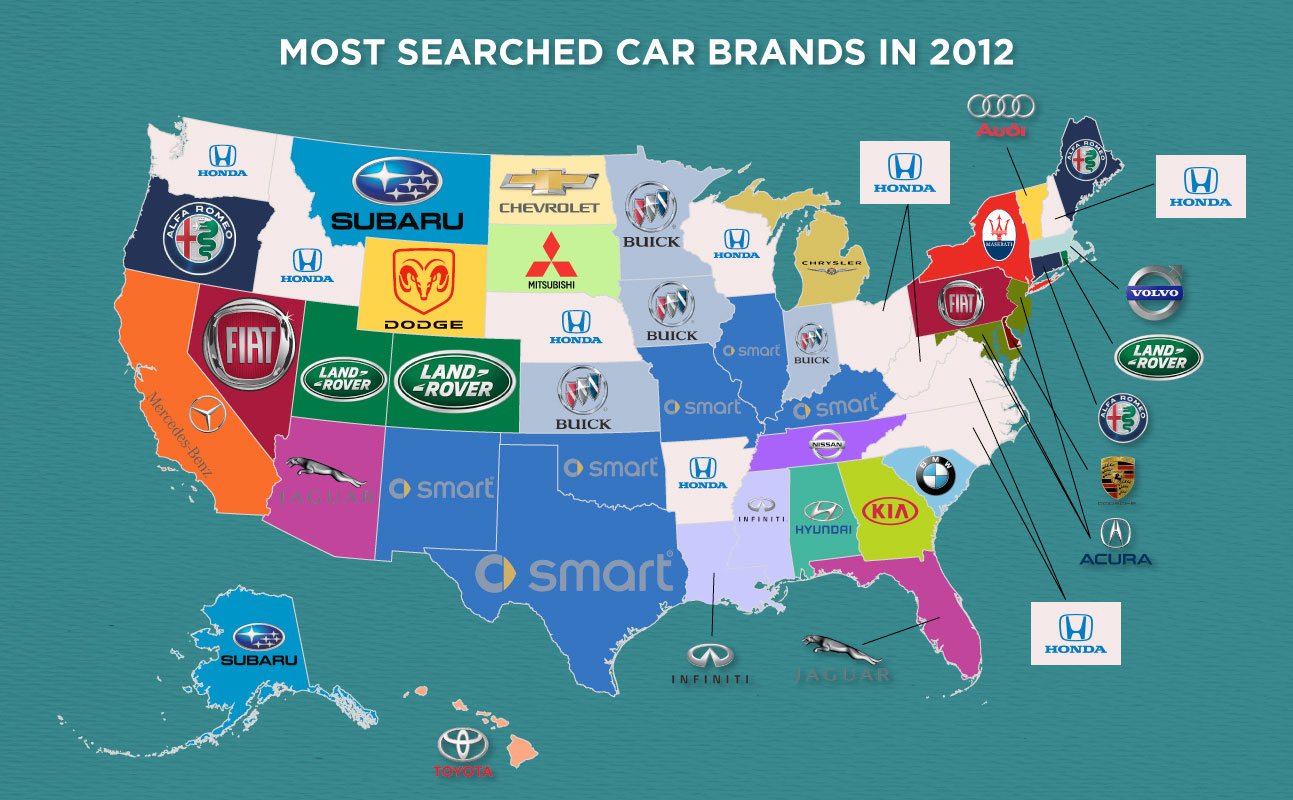 Starting in 2012, two brands dominated the search interest across the country -- Smart Car and Honda. Honda led in 8 states while Smart Car led in 6 states. One thing to note is that gas prices were significantly higher five years ago than they are today. According to AAA, it was the most expensive year on record where the average cost of a gallon of gasoline was $3.60. Both Honda vehicles and Smart Cars have good gas efficiency ratings, which could explain the popularity of these brands in 2012. 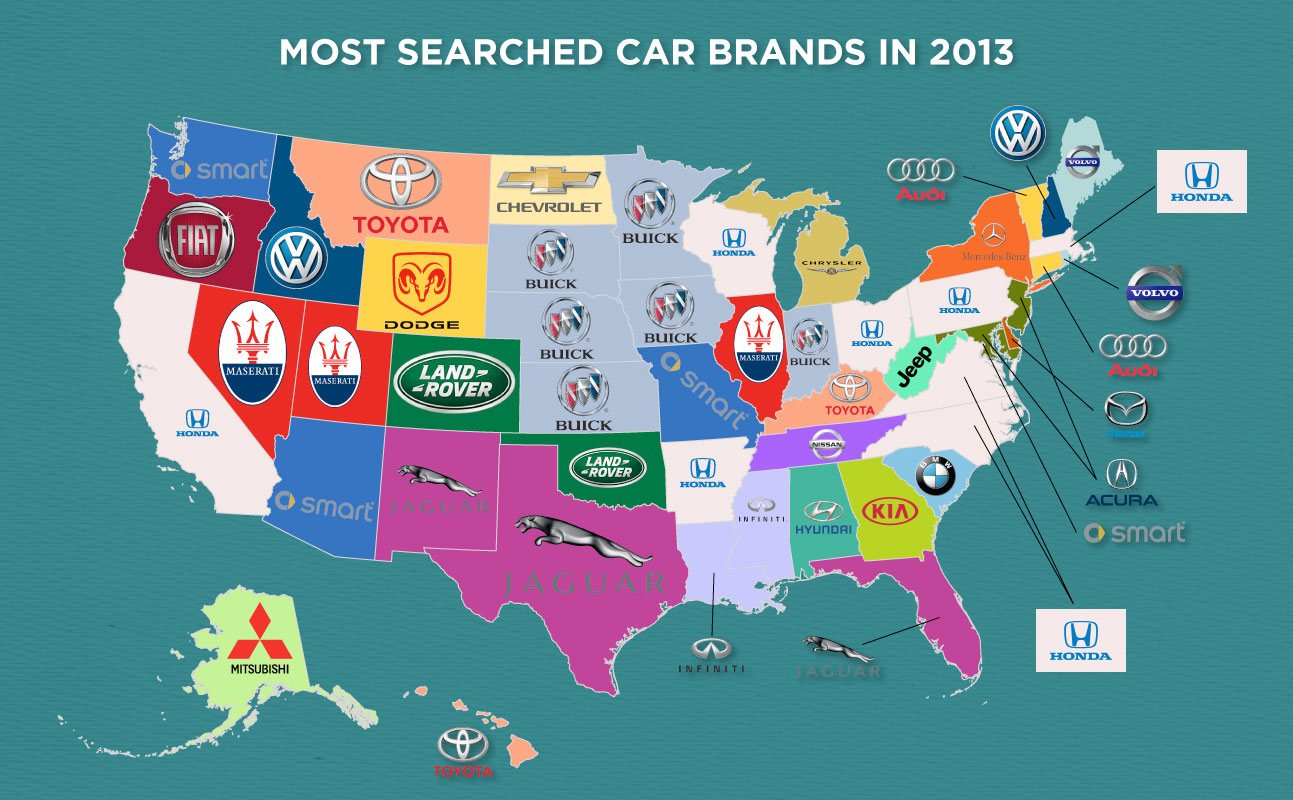 2013 was another year with a high number of states with Honda as their top search interest -- 8 states. Buick also was a top-searched brand with 6 states. A surprise was the luxury brand, Jaguar, with 3 states, including Texas and Florida. 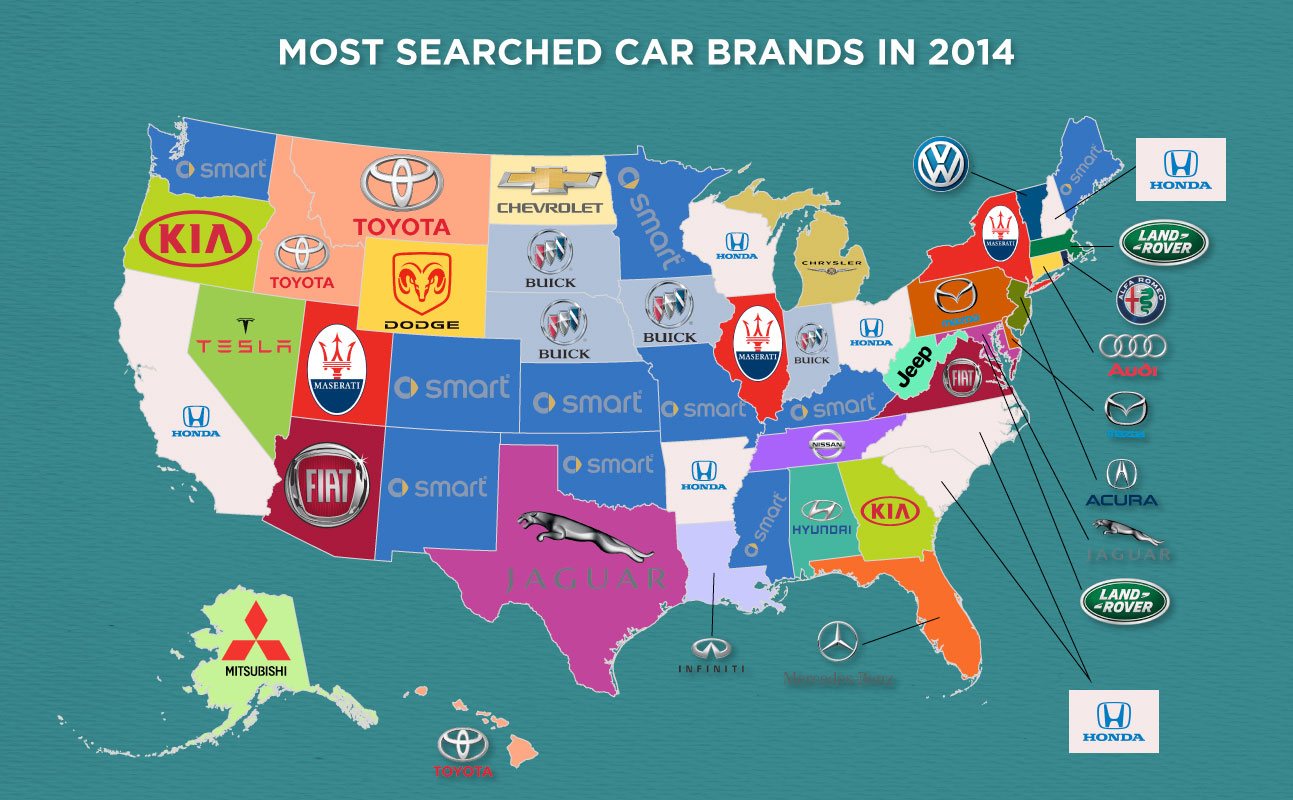 Smart Car roared back into popularity in 2014 after only being the lead in a few states the previous year. They had the most in 2014 with 10 states. Honda had a slight decrease, only leading in 6 states. 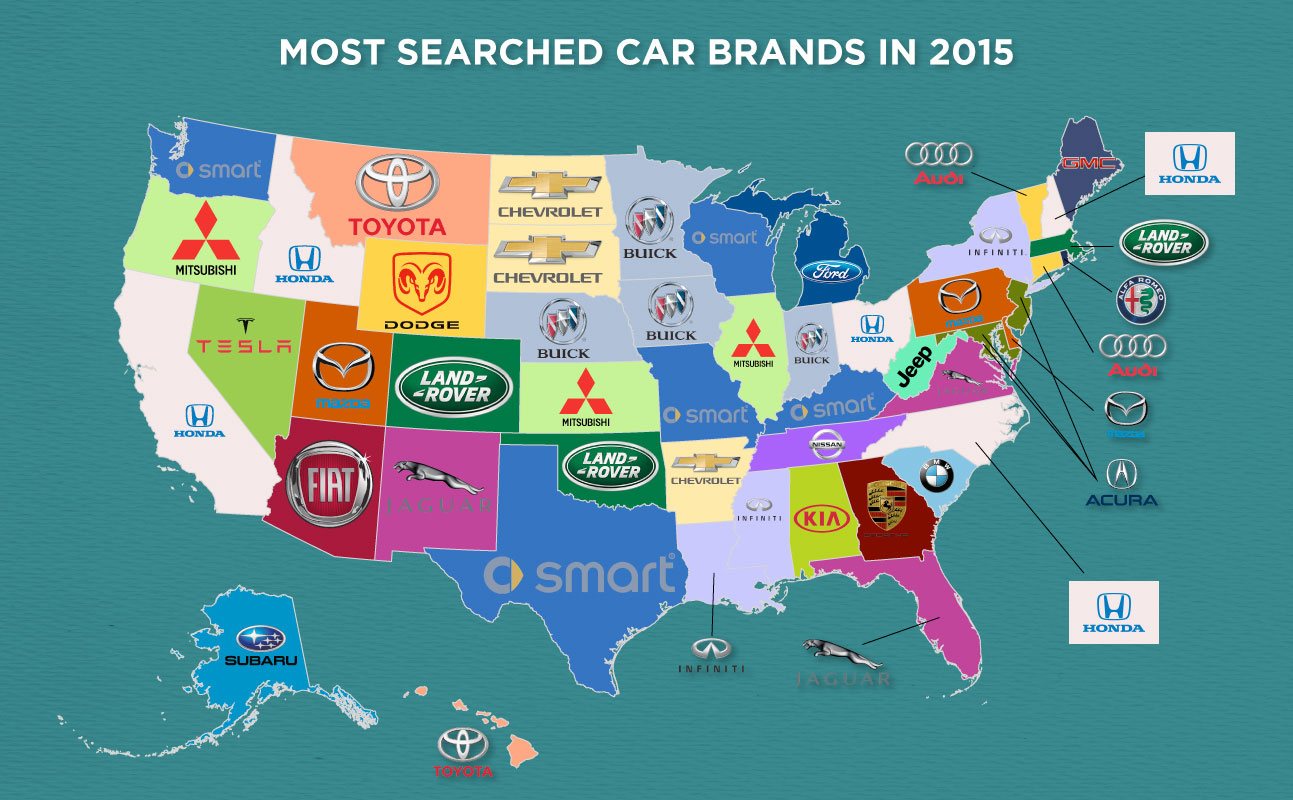 2015 was a year that was all over the place when it came to Google Trends. No one brand really stood out. Instead, a few brands had a moderate amount of states. Honda and Smart had 5 while Buick had 4. 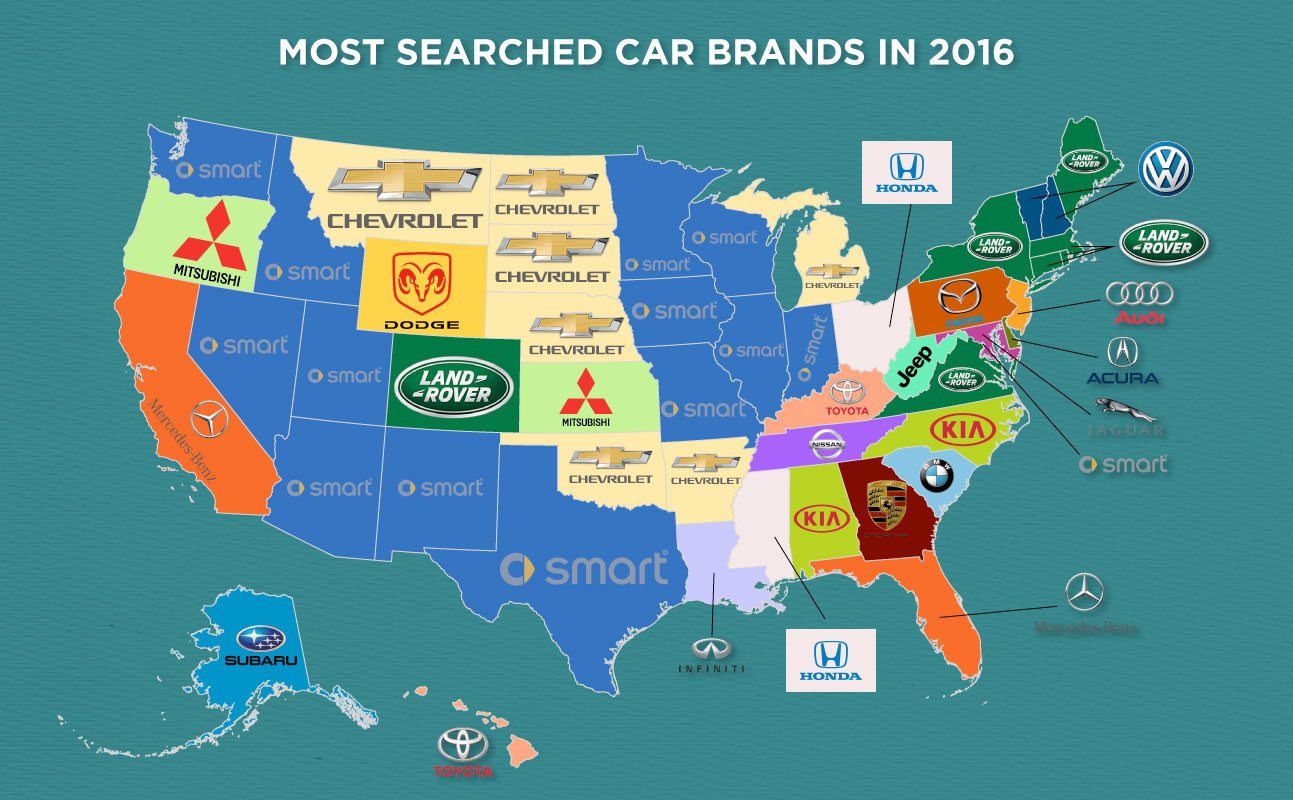 According to Google Trends, Smart Car was definitely of big interest for people in 2016. It had the most search interest in 13 states. Chevrolet was a surprise this year with 7 states. This was a down year for Honda, leading in just 2 states. 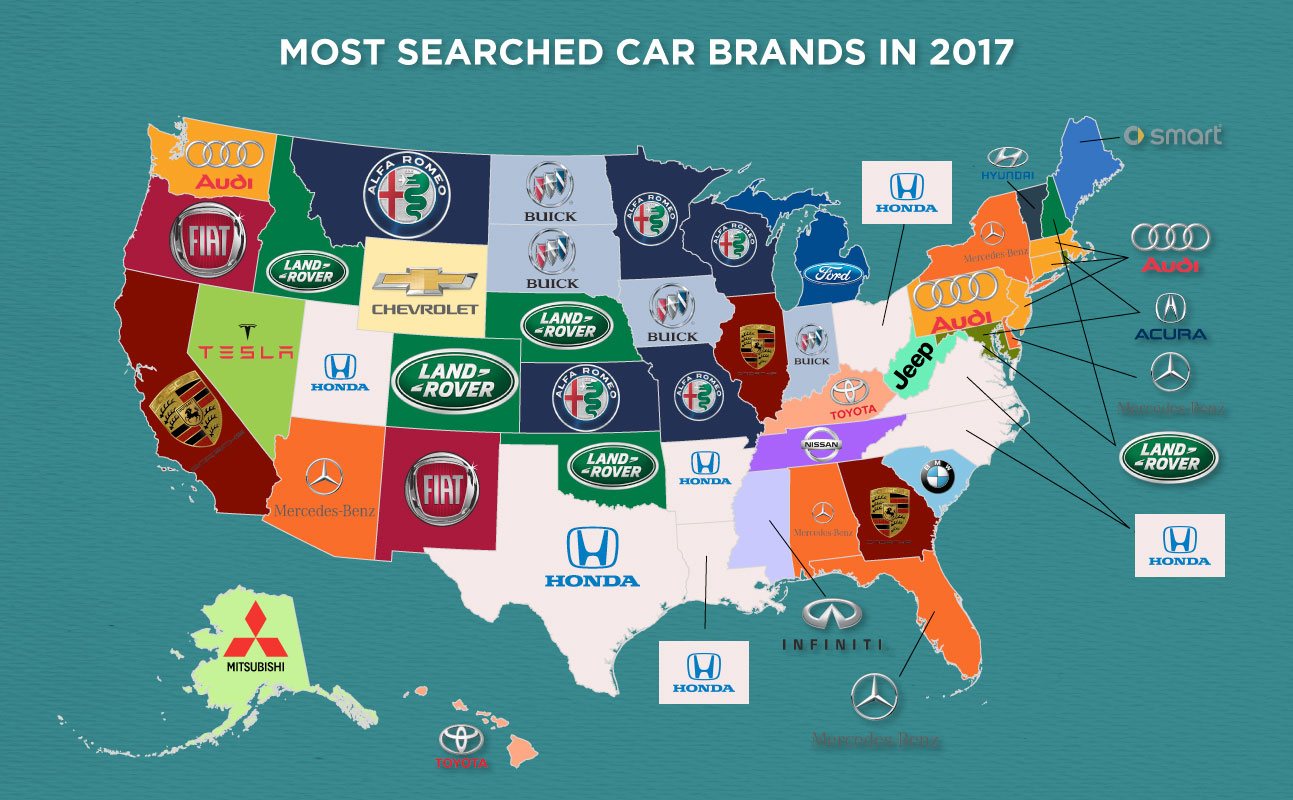 Honda returned to form in the start of the new year. So far in 2017 it leads search interest in 6 states, but could add more as the year goes on. There’s been two surprises this year, Land Rover and Alfa Romeo, both luxury brands. It’s interesting to note that Alfa Romeo had a robust advertising campaign in the Super Bowl. It’s likely that consumers went straight to Google after seeing multiple Alfa Romeo commercials during the big game.

And finally, to see the shift in brand popularity over time, we combined the maps to visualize those changes in search activity. Overall, Google Trends shows us that Honda is a top brand and one that has a high search interest throughout the country. Over the last five years, it has almost consistently been near the top in the number of states. It is interesting to see how these Google searches have evolved over time and the brands that have come in and out of popularity over time.